Products from F Ball and Co. Ltd. have been used to create a high-quality, contemporary flooring finish on the ground floor of a newly-constructed, lakeside residential property in Tattingstone, near Ipswich.

Contractors from The Polished Concrete Co., in Croydon, were called to install F Ball Stopgap 800 Wearcoat self-levelling wearing surface throughout the building’s ground floor areas, over a total area of 200m2, including in the entrance hallway, two bedrooms and living room with large glass windows. F Ball Stopgap 800 was chosen to create a visually interesting, natural appearance and a harmonious transition between inside and outside environments. F Ball’s Stopgap P131 primer and Stopgap F77 waterproof surface membrane were also used in the installation.

Before any work was undertaken, a moisture test was carried out to ascertain levels of subfloor moisture in the building’s concrete subfloor, and it was determined that subfloor relative humidity (RH) levels were 75–80%. Where relative humidity levels are greater than 75% (65% if wood floor coverings are to be installed) a waterproof surface membrane will be required to provide a barrier against excess moisture and prevent possible floor failure. Therefore, contractors installed F Ball’s Stopgap F77 two-part, epoxy resin waterproof surface membrane over all ground floor areas.

Stopgap F77 is applied in a single coat and fully cures in as little as three hours to create a barrier against residual construction moisture or rising damp where relative humidity values are up to 98%.

With few exceptions, it’s essential to prime a subfloor before the application of a levelling compound, so a single coat of F. Ball’s P131 primer was applied. When used over non-absorbent surfaces, such as Stopgap waterproof surface membranes, primers serve to promote adhesion of subsequently applied levelling compounds. Stopgap P131 typically dries in less than 60 minutes when applied over non-absorbent subfloors and is pigmented green to visually gauge coverage.

Contractors could then proceed to install Stopgap 800 Wearcoat throughout the entire floor. Stopgap 800 is a self-levelling, industrial-grade floor compound used for upgrading and renovating new and existing internal floors in light to heavy duty applications where floor coverings are not required to be installed. While still wet, an F Ball spiked roller was used to dispel any trapped air in the levelling compound and optimise the appearance of the finished result.

When dry, contractors polished the surface before applying a sealer to protect the surface from water and other liquids.

Commenting on the project, John Butt, managing director at The Polished Concrete Co., said: “It’s been great to be a part of this project. Not only is the building architecturally interesting, it’s situated in a very attractive location, and the finish of the F Ball Stopgap 800 adds to the aesthetic that has been created. Our customers love Stopgap 800 for its superior appearance to concrete.” 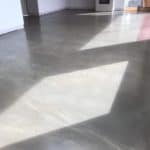 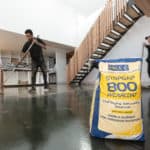 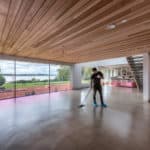 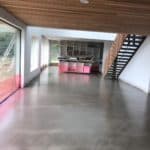 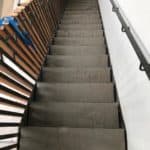 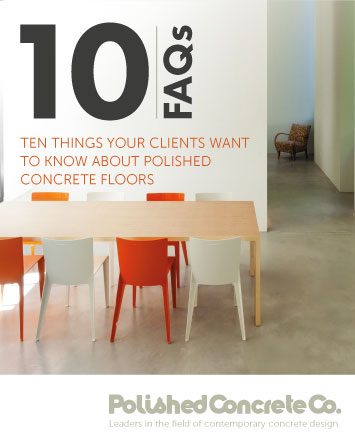 Like most websites we use cookies. By continuing to browse the site you are agreeing to our use of cookies. More info ...
© Copyright 2022 Polished Concrete Co | Web design by Union 10 Design